Use our extensive free resources below to learn about Foundations of Trigonometry. 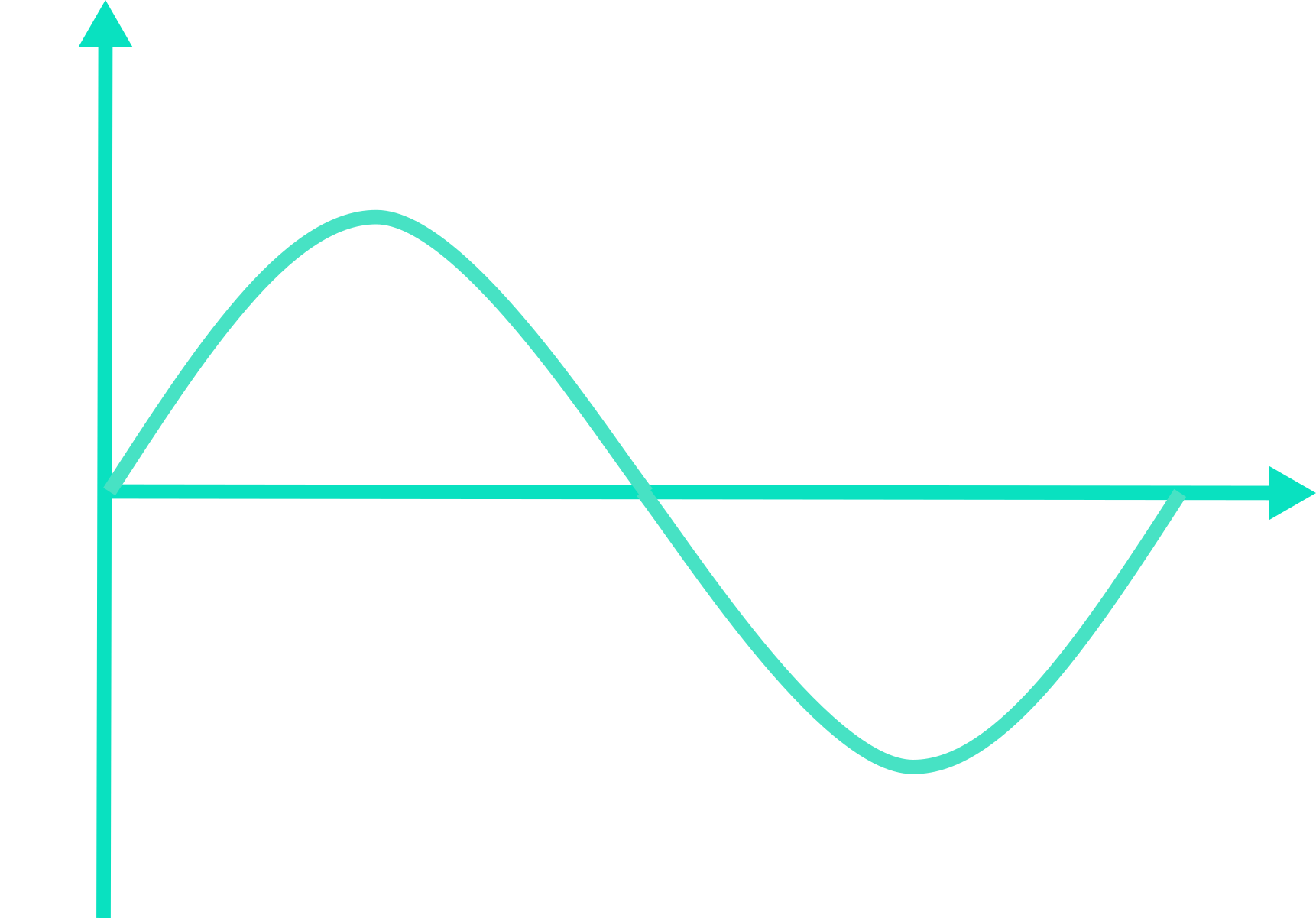 Trigonometry is one of the most detailed sections of the National 5 curriculum. The material below is designed to provide a foundational understanding of the key concepts underpinning the study of trigonometry that will be expanded upon in the topics which follow.

Sine, cosine and tangent (often shortened to \sin{}, \cos{} and \tan{}) are functions which define ratios between the sides of a right-angled triangle.

The sine, cosine and tangent functions are defined as follows:

In short, the \boldsymbol{\sin{}}, \boldsymbol{\cos{}} and \boldsymbol{\tan{}} functions define relationships between the sides and the angles of right-angled triangles.

Using these functions, as long as you know either:

– One side and one angle; or
– Two sides

You will always be able to calculate the lengths of the other missing sides or angles.

Because they include information about a right-angled triangle’s angles, the \sin, \cos and \tan functions significantly expand the universe of problems you can solve using trigonometry (as you will see in the rest of the topics in this module).

Depending on the information you have about a triangle, it will be appropriate to use either the \sin{}, \cos{} or \tan{} function. To help you decide which function to use, it is useful to remember the mnemonic SOH CAH TOA:

At this stage it useful to start thinking about how the \sin{x}, \cos{x}, and \tan{x} functions might look when we sketch them. As always, when faced with a new type of function it is often useful to create a simple coordinate table and plot the points to get a feel for how the function gets its shape.

For starters, let’s plot just a few coordinates going up in 45^\circ increments. Plug each of these x values into the \sin{x} function in your calculator and you will get the following results: 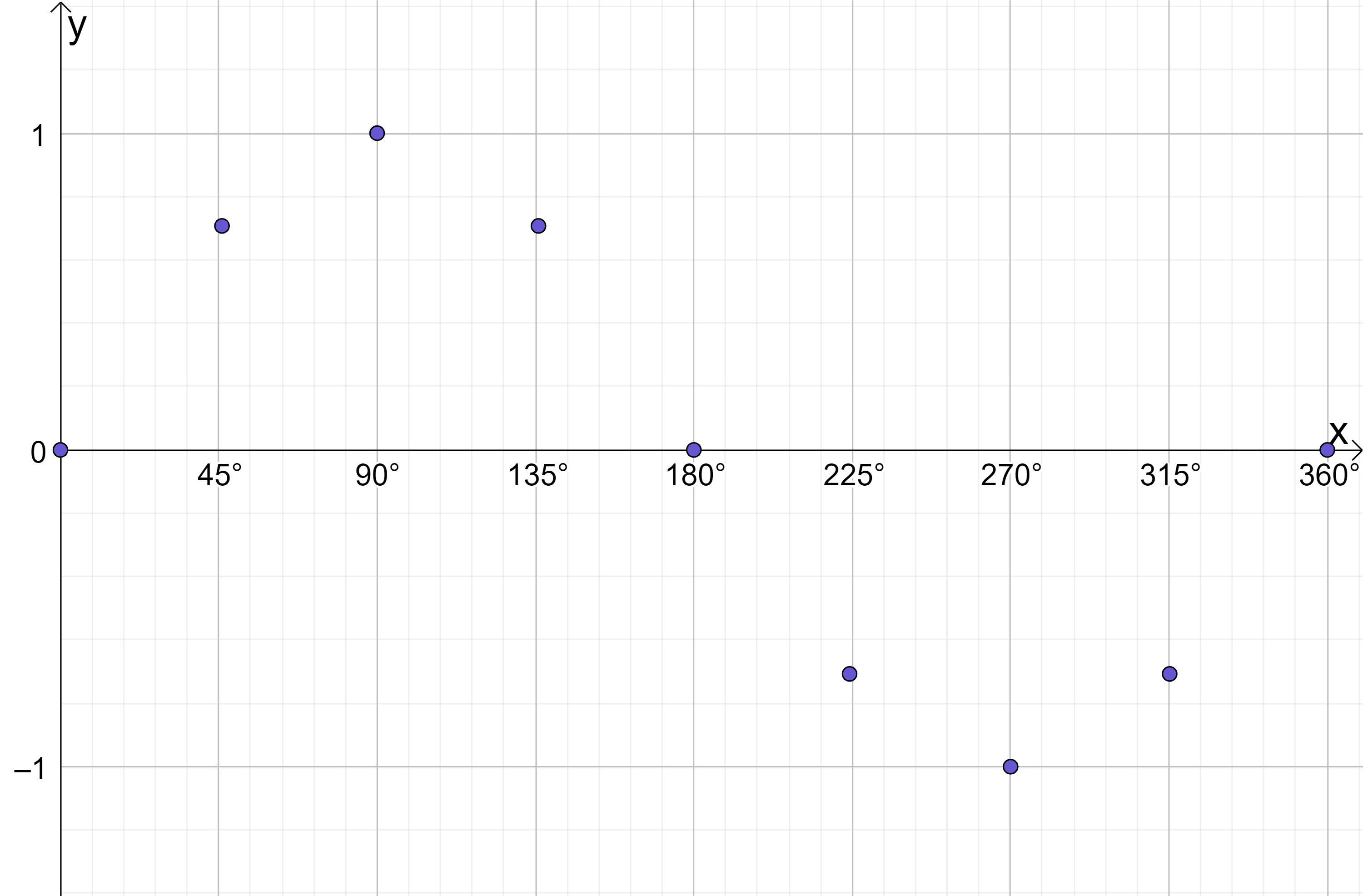 Can you see the graph beginning to take shape? We’ve only plotted 9 coordinates so far, but already we can see this is definitely very different to the other types of functions we have met up till now (which have been either straight lines or quadratics). Let’s expand the coordinate table by adding some additional values: 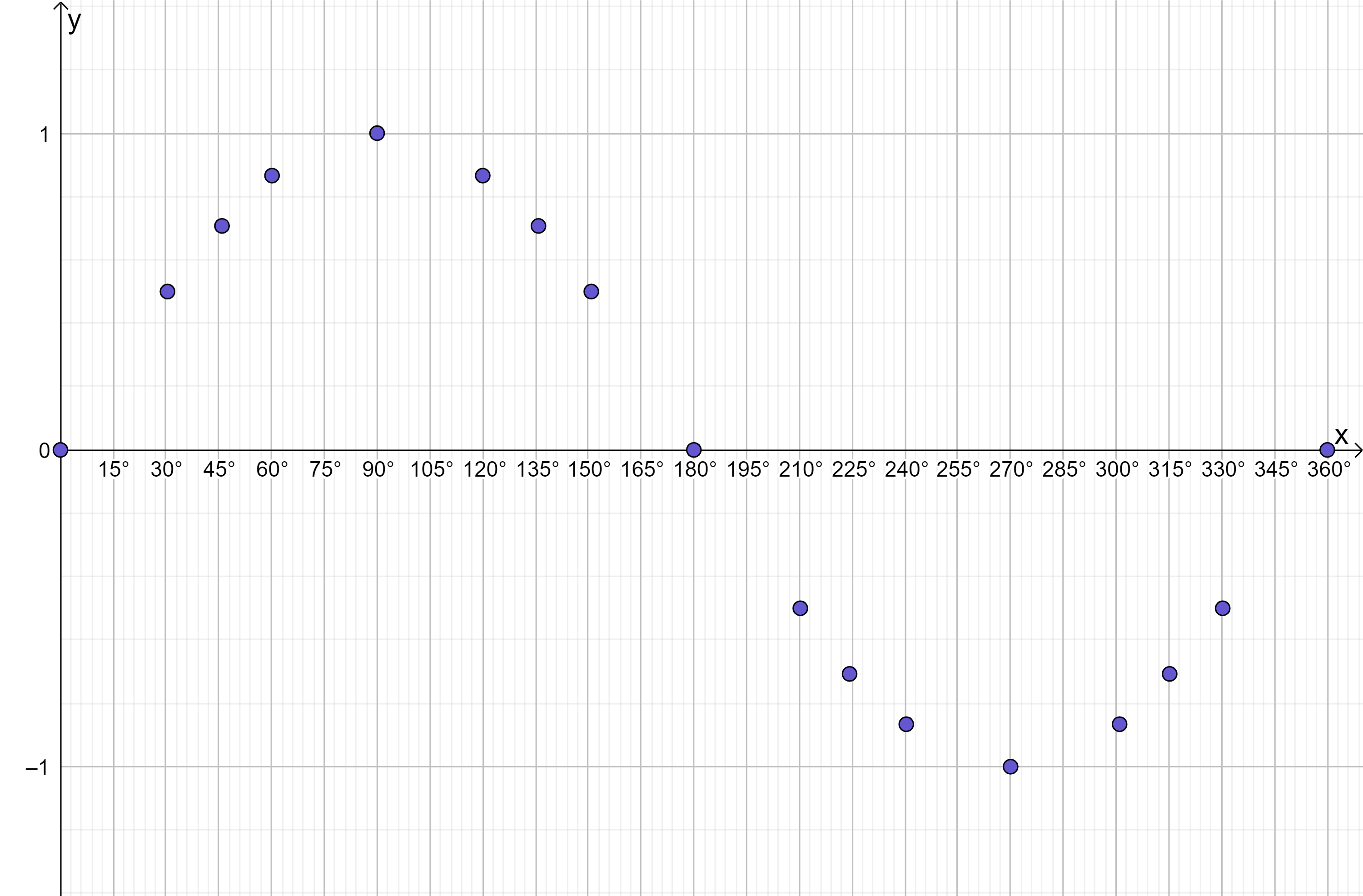 Hopefully now the shape of this function is becoming quite apparent – it is a wave! Plotting each point for all the x values from 0^\circ, 1^\circ, 2^\circ...  359^\circ, 360^\circ produces the smooth wave below: 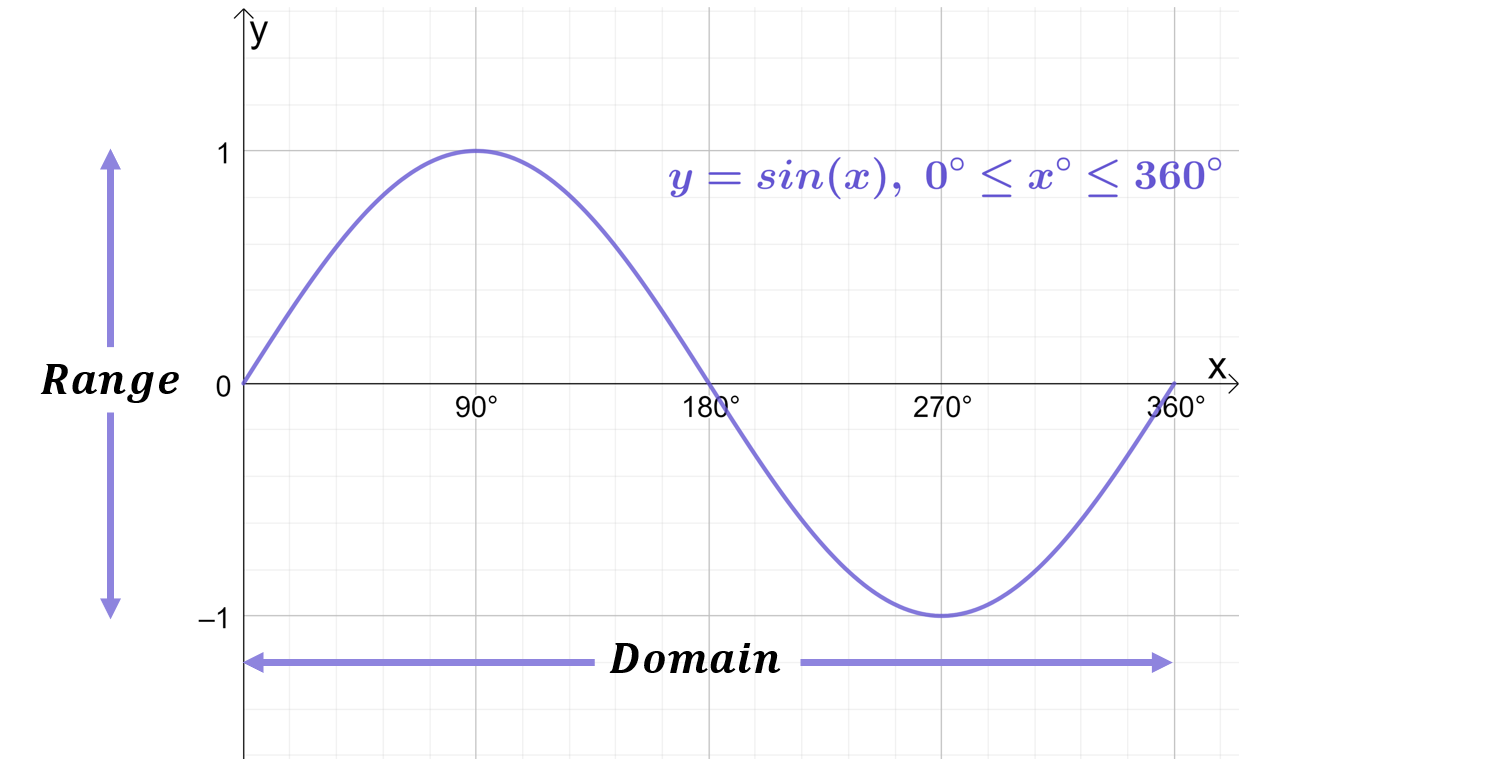 As this is the first wave function you have met, it’s important to introduce a few further concepts: 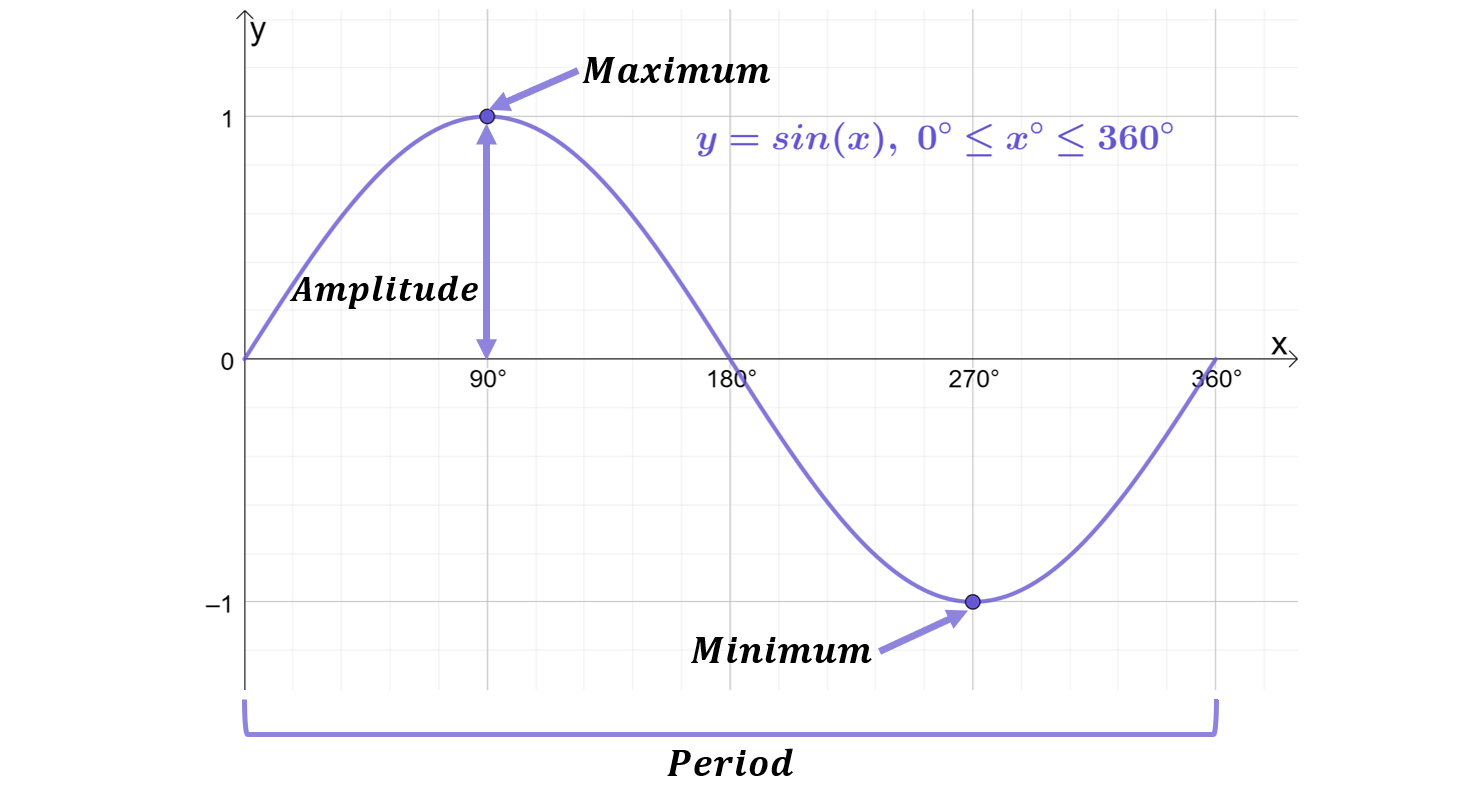 Performing a very similar coordinates exercise with the functions y=\cos{x} and y=\tan{x} and plotting the results would produce the following (very different) graphs of the 3 basic trigonometric functions: 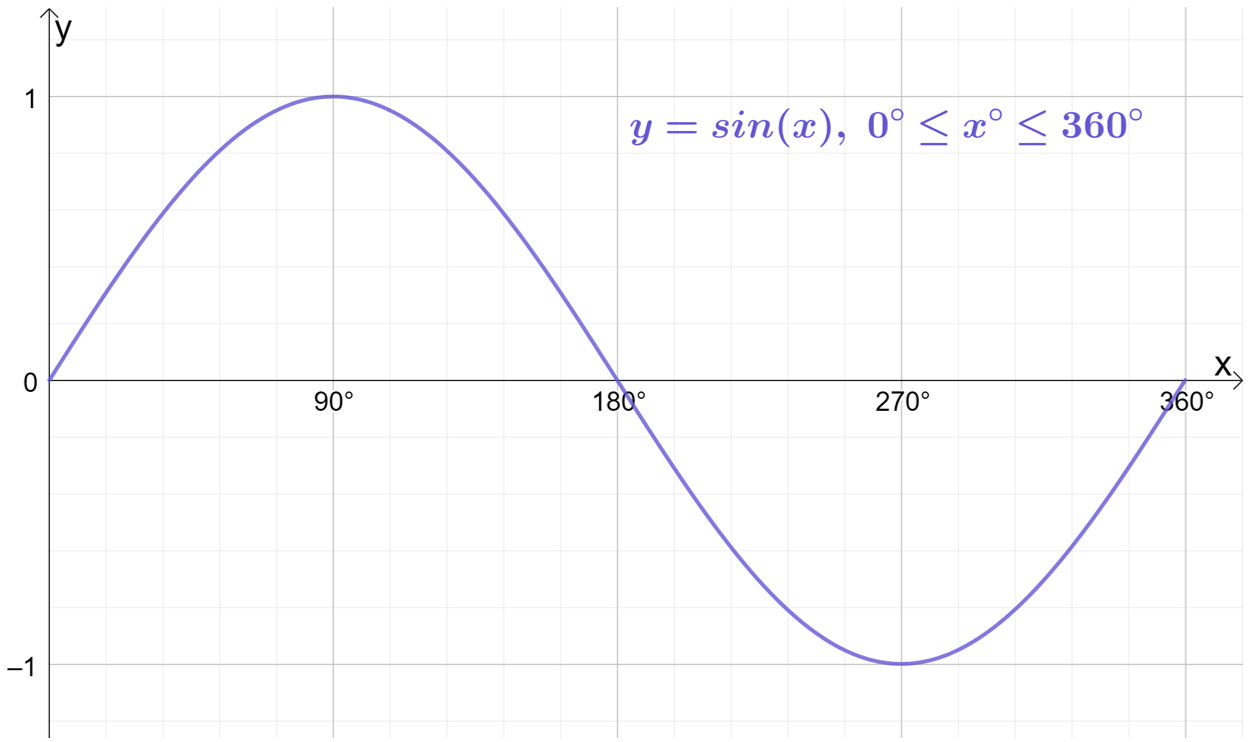 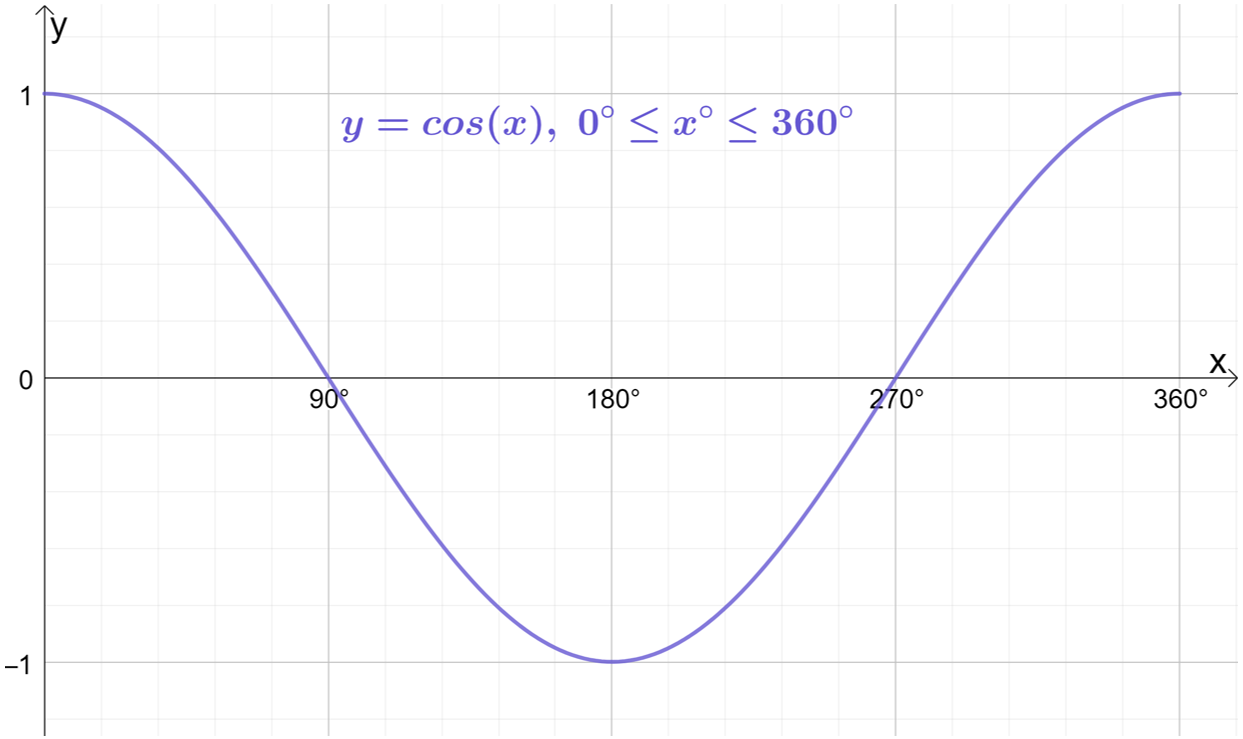 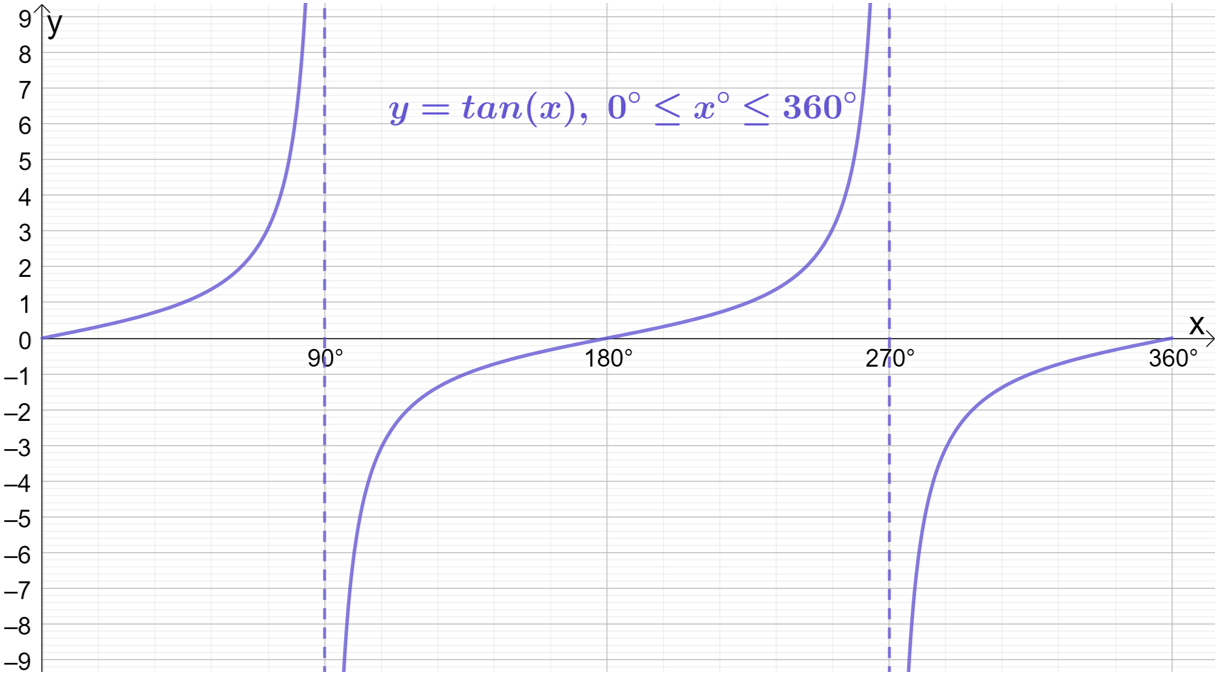 When someone generally references the “graph of y=\sin{x}, y=\cos{x} or y=\tan{x}” without further details, the 3 graphs above are the graphs they are referring to.

Don’t worry if the features of these graphs (particularly the graph of y=\tan{x}) don’t make much sense to you right now – we will discuss the features of each graph in more detail in the next topic.

All of the functions above have been sketched on the same domain of 0^\circ\leq x\leq360^\circ. But \sin{x}, \cos{x} and \tan{x} are periodic functions (functions which repeat values in regular intervals or periods), so by extending the domain wider than 0^\circ\leq x\leq360^\circ (by using x values lower than 0^\circ and higher than 360^\circ) we start to see these waves repeating themselves.

The \boldsymbol{\sin{x}}, \boldsymbol{\cos{x}} and \boldsymbol{\tan{x}} waves extend forever in both positive and negative directions. Now clearly it is impossible to actually draw that (you’d need an impossibly large sheet of paper!), so you’re only every drawing a small part of the \sin{x}, \cos{x} and \tan{x} waves. The domain basically dictates the small part, or “snapshot”, of a wave that you are being asked to show.

So, if we just keep extending the domain further and further, it will produce more and more repetitions of the waves! Sketching \sin{x}, \cos{x} and \tan{x} on the even wider domain of -720^\circ\leq x\leq720^\circ gives:

We could continue adding more and more waves in this manner forever, but I think you get the picture!

The \sin{}, \cos{} and \tan{} functions define relationships between the sides and the angles of right-angled triangles:

Using these functions, as long as you know either:

– One side and one angle; or
– Two sides

You will always be able be able to calculate the lengths of the other missing sides or angles.

The SOH CAH TOA triangles are useful tools to help you decide which trigonometric function (i.e. \sin{}, \cos{} or \tan{}) you should be using in a given situation:

The \sin{x}, \cos{x} and \tan{x} functions are periodic functions, meaning they begin to repeat themselves if you extend the domain.

The \sin{x}, \cos{x} and \tan{x} graphs are often shown as standard on a domain of 0^\circ to 360^\circ. If you extend the domain wider than this, you will begin to see more cycles of the waves.

The \sin{x}, \cos{x} and \tan{x} functions are waves. All waves have an amplitude, period, maximum and minimum.

The maximum is the point at which the function’s value is greatest.

The minimum is the point at which the function’s value is lowest.

Learn About Foundations of Trigonometry with National5.com 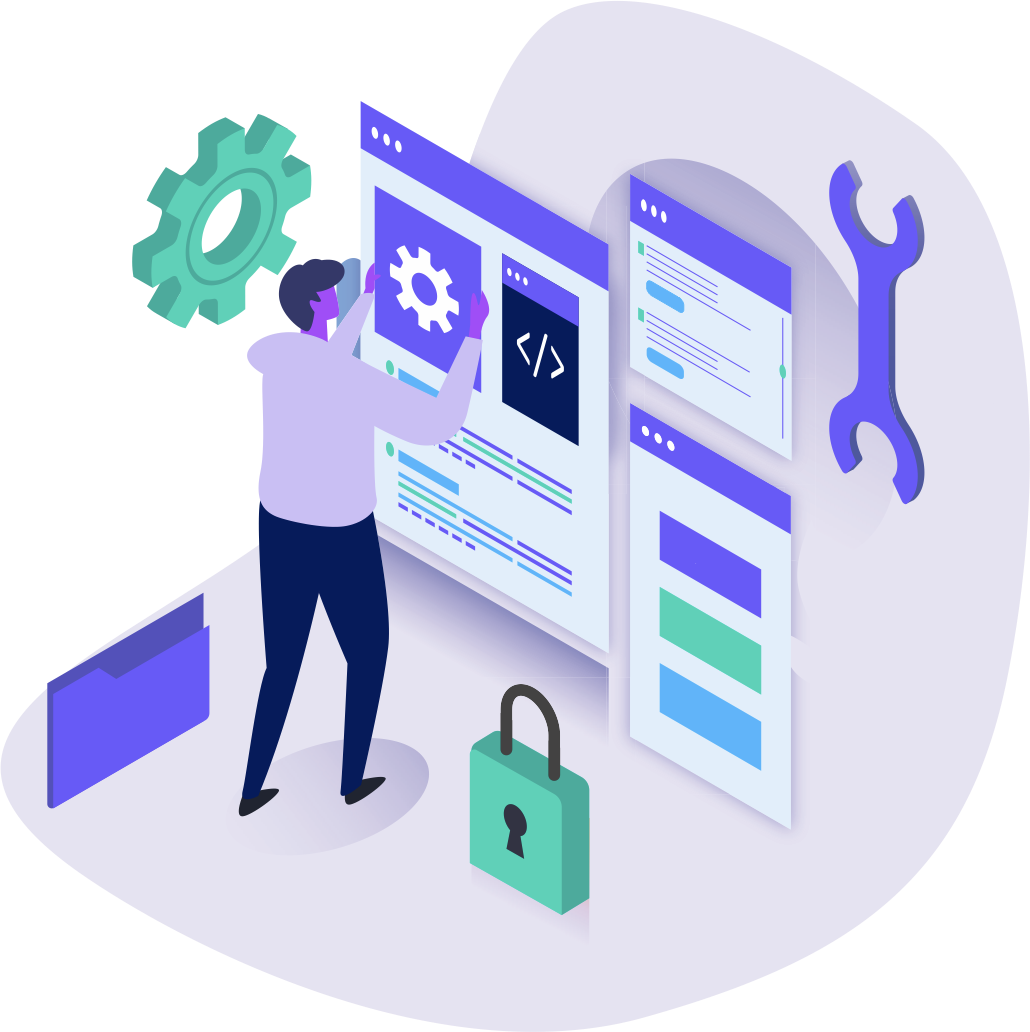 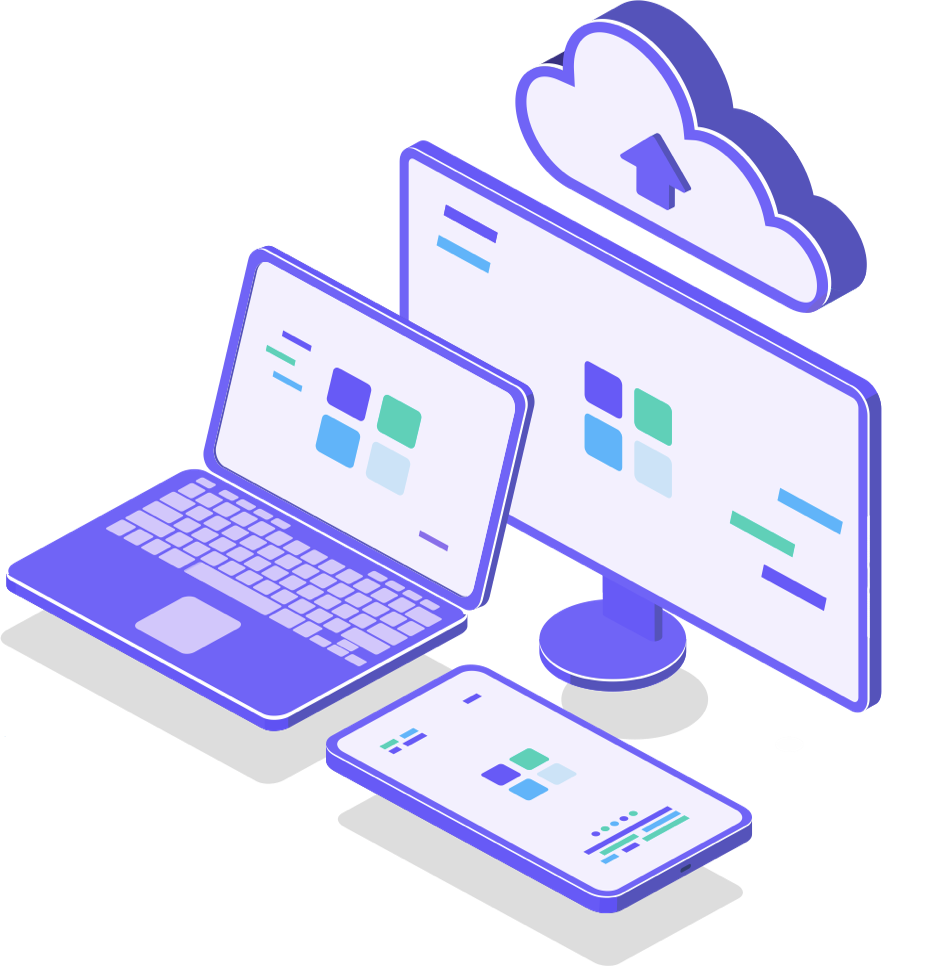 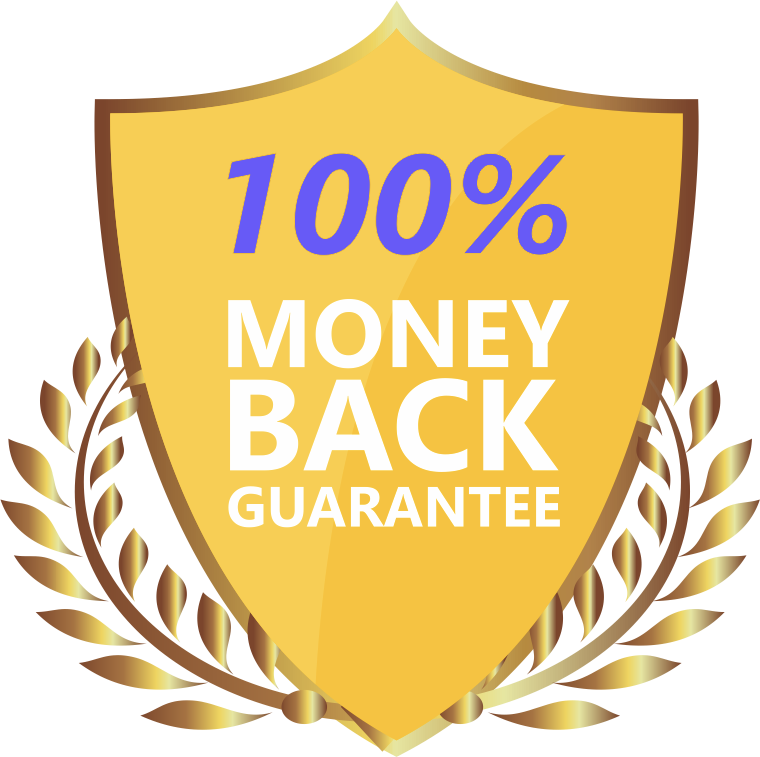